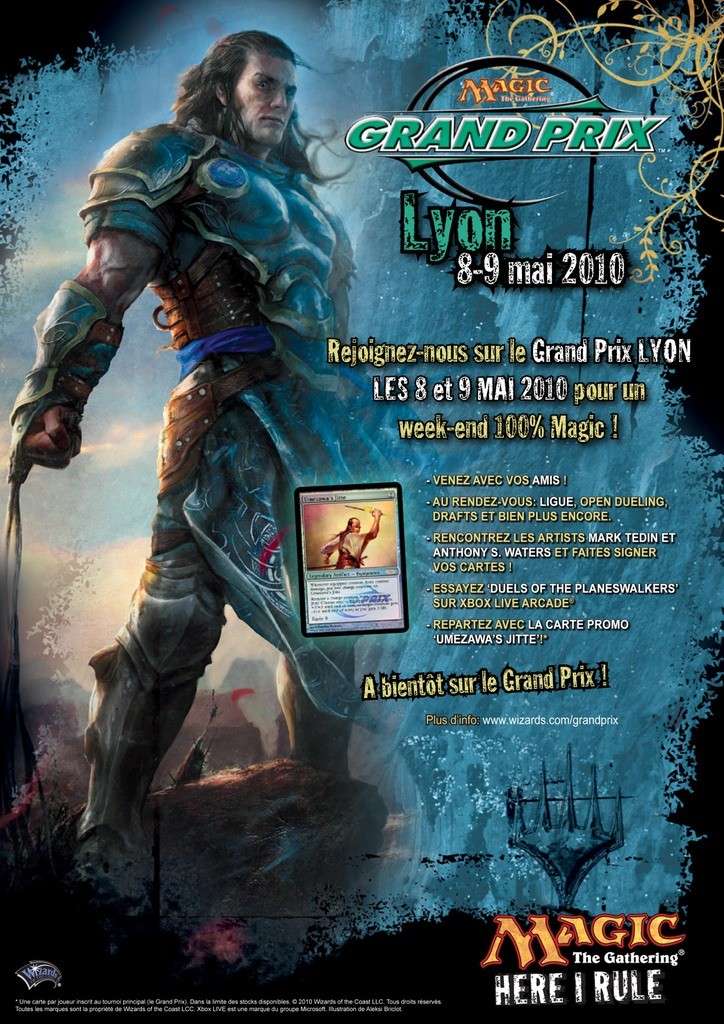 The main tournament at Grand Prix–Lyon is open to Magic players of all ages.

Judges
The Head Judge at Grand Prix-Lyon will be Carlos Ho.

* 40K, Rules Enforcement Level (REL) is Competitive (Day 1) and Professional (Day 2)
* The Magic: The Gathering Tournament Rules and the Magic: The Gathering Infraction Procedure Guide are in effect for this event unless specifically overruled by information in this Format Document. Rules documents can be found in the DCI Document Center.
* Players must bring pen, paper, card sleeves and appropriate counters.
* In the event that a player who wins an invitation to a Pro Tour stop at a Grand Prix has already qualified for an invitation, the invitation does not pass down under any circumstances. Previous qualification may be through a Qualifier tournament, through performance at a professional tournament, or by being an invited DCI player (valid upon the date of the official rank announcement for the appropriate professional tournament).

Byes will be given to players in the Grand Prix based on the following criteria (Byes are not cumulative throughout the season or year. Byes do not pass down under any circumstances. Players that accumulate multiple byes to a particular Grand Prix tournament receive only the bye for the greatest number of rounds):

Trial winners
People who win a Trial event are awarded 3 byes in the Grand Prix that it feeds. Trial byes are not cumulative with other byes and do not pass down.

Anthony S. Waters
Anthony Scott Waters is a concept artist and illustrator based in Southern California. His career has taken him from the early days of interactive software all the way to Hollywood, with many stops in between. He’s known as a monster maker and environment designer for Magic as well as companies like Microsoft, Hasbro and Electronic Arts. His work has also been featured in Spectrum: The Best in Contemporary Fantastic Art, issues 9 through 14, and toured the country in the MacExpo Digital Art Show. His professional portfolio can be viewed at www.thinktankstudios.com. His Deviant Art contains a wide sampling of his work, possibly including things that could be considered deviant. bloated-nose.blogspot.com is where Anthony blogs, mostly about things much less disgusting than the blog's title might suggest.

Mark Tedin
Mark came on board as a freelance artist at Wizards of the Coast in the summer of 1992. Since then, he's contributed artistically to nearly all the fantasy/adventure games the company produces, including most sets of Magic: The Gathering. When Mark's not working on Wizards of the Coast projects, he enjoys hanging out and drawing in Seattle cafes, designing sets for theatrical productions, or going to science fiction movies. In fact, it's Mark's fondness for the worlds of science fiction and fantasy that helped shape him into the artist he is today.

From 1997-2000, Mark also worked on site at Wizards of the Coast as a staff conceptual artist. Since then, he's also been teaching illustration, visual composition, and figure drawing part-time at the Northwest College of Art near Seattle.

You can easily find all travel information on the venue website, clicking here.

Accommodations
There are a few hotels at walking distance from the CCC Lyon. These hotels are however not endorsed by or affiliated with Wizards of the Coast. Hotels will accept reservations subject to availability of rooms and rates.

Pour le moment on a