+1: Untap up to two target artifacts.
-X: Search your library for an artifact card with converted mana cost X or less and put it onto the battlefield. Then shuffle your library.
-5: Artifacts you control become 5/5 artifact creatures until end of turn.

Suspend 3—{0} (Rather than cast this card from your hand, pay {0} and exile it with three time counters on it. At the beginning of your upkeep, remove a time counter. When the last is removed, cast it without paying its mana cost.)

{T}, Sacrifice Lotus Bloom: Add three mana of any one color to your mana pool.

202.3a The converted mana cost of an object with no mana cost is 0. 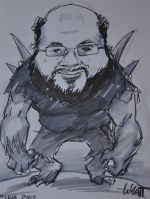