As a consequence of rock-paper-scissors programming contests, many strong algorithms have emerged. For example, Iocaine Powder, which won the First International RoShamBo Programming Competition in 1999, uses a heuristically designed compilation of strategies. For each strategy it employs, it also has six metastrategies which defeat second-guessing, triple-guessing, as well as second-guessing the opponent, and so on. The optimal strategy or metastrategy is chosen based on past performance. The main strategies it employs are history matching, frequency analysis, and random guessing. Its strongest strategy, history matching, searches for a sequence in the past that matches the last few moves in order to predict the next move of the algorithm. In frequency analysis, the program simply identifies the most frequently played move. The random guess is a fallback method that is used to prevent a devastating loss in the event that the other strategies fail. More than ten years later, the top performing strategies on an ongoing rock-paper-scissors programming competition similarly use metastrategies. However, there have been some innovations, such as using multiple history matching schemes that each match a different aspect of the history - for example, the opponent's moves, the program's own moves, or a combination of both. There have also been other algorithms based on Markov chains. 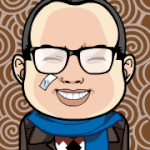 "What would you have done there, Tray? I have absolutly no clue."

This is a robotic hand created by the folks at the University of Tokyo's Ishikawa Oku Lab that never loses at paper-rock-scissors. How? By reading your hand then responding with the winning gesture in less than a millisecond. Whatever, I could still beat it. Ready? One, two, three, shoot! Damn, he got me. Best two out of three. *lops robot's fingers off with bolt-cutters* Haha -- now he's always rock! Ready? One, two, three, shoot! "Dammit GW, you choose scissors." Man, he's GOOD.